“I think the truth is that everyone in the entire world is confused and nobody understands much of anything at all.” 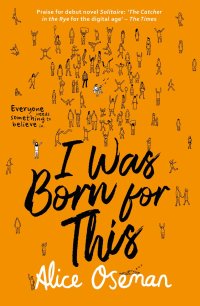 Title: I Was Born for This

For Angel Rahimi, life is only about one thing: The Ark – a pop-rock trio of teenage boys who are currently taking the world by storm. Being part of The Ark’s fandom has given her everything – her friendships, her dreams, her place in the world.

Jimmy Kaga-Ricci owes everything to The Ark too. He’s their frontman – and playing in a band is all he’s ever dreamed of doing. It’s just a shame that recently everything in his life seems to have turned into a bit of a nightmare.

Because that’s the problem with dreaming – eventually, inevitably, real life arrives with a wake-up call. And when Angel and Jimmy are unexpectedly thrust together, they will discover just how strange and surprising facing up to reality can be.

Alice Oseman is a gift to this world that we don’t deserve. I’m so glad I decided to start over after the disaster that was Solitaire, because honestly, it was so worth it. First there was Radio Silence, which is too amazing for words (but you can check out my attempt in my review!) and now I Was Born for This. Needless to say, if there’s another book she’s planning to write (*slides Alice ten dollars* please OuO) you bet I’m running to the bookstore to get it.

I feel like this book is meant for especially a certain group of people, and that’s fans. It doesn’t matter what you like: books, music, movies, shows, etc.— this book is for you because it explores the ups and downs of being in a fandom.

Fereshteh “Angel” Rahimi, an Iranian Muslima hijabi, is obsessed with a band called The Ark. She knows how adults would look down on her for that; they think she’s a lifeless, lonely teenager with nothing to do, so she chooses to spend time on some “teen boy band” instead. But to Angel, The Ark isn’t just a band—they’re like guardian angels who’ve descended from the sky to spread love and happiness in the world. She takes one look at them and instantly believes that love is possible, that hope is a thing worth holding on to. It’s why she ships two members of the band together; the ship name is called ‘Jowan’. And she’s not the only one. Almost the entire fandom wants them to be together, and the sad part is that they don’t even realise how much this pressure and obsession is impacting the band members themselves.

Before moving on to the band members, I’d like to say that the rep is really well-done. I love how the book isn’t about Angel being Muslim, but it’s simply part of her. It’s who she is and it’s not made to be a big deal every two pages. Also, running and fearing that your hijab might fly off any second? Most relatable Muslima thing ever. Been there, done that.

(Also, brownie points because Fereshteh and I have the same alias, what!)

Jimmy Kaga-Ricci, an Italian-Indian gay trans guy with an anxiety disorder, is one of the members of The Ark. There’s also Rowan Omondi who is Nigerian (hence “Jowan”—Jimmy+Rowan), and Allister “Lister” Bird, one of the two bisexual characters in this book.

Jimmy loves Rowan, but not in the way the fandom wants him to. He just likes their friendship and is reassured by the fact that he has a shoulder to cry on when things get tough. His anxiety really tires him. The paranoia he goes through at seemingly ‘random’ moments in this book was actually very relatable; I’ve had similar fears and worries, sometimes out of literally nowhere. Anxiety does that—it makes you scared all of a sudden, makes you get irrational thoughts and obsessively worry about the littlest things. I related to Jimmy a lot in this book and I’m so happy that he’s treated so well.

While the fans only see the happy, talented boys in public, they don’t realise what really goes on behind the scenes because Jimmy, Rowan and Lister are very good actors. They paint a smile on their faces every time they’re on stage because they know they can’t be anything but what the fans want them to be, and that’s a really upsetting thing to think about. This book really explores the price of fame and what it means to have people be obsessed with you to the point that they would willingly violate your personal space just to get closer to you. All of this pressure from the fans and the tension between them has The Ark members really jumpy. Their relationship starts to become more fragile, the trust between them easily breakable because of misunderstandings and stress. I love the way this impacts their dynamic because it’s so realistic.

The way Angel’s and Jimmy’s stories clash pleasantly surprised me. I was terrified it would be something cheesy or predictable, but in reality, it fits well with the plot and characters. I loved the relationship between them; it’s an unlikely friendship but you know that it’s one that will stick, no matter the distance between them, no matter the days that go by where they don’t talk.

We also have Bliss Lai, a Chinese-white bisexual, who kicks so much ass by just being herself. I loved her character. She becomes a very important person in Angel’s life and someone she learns a lot from. She’s also hilarious and a queen among queens, so, really, how could anyone hate her?

Have you read I Was Born for This? Would you like to? Let me know!